Education in China has its unique long history, especially those private schools, normally with a very limited number of students taught by a master, but the modern-sense university only came into being in about one century ago. The forerunners of higher education established in 1890s were the present Tianjin University, Jiaotong University, Peking University and Sichuan University (1896). The birth of public university came in the intellectual historical background of saving the country through education, especially for the reformers who promoted the way, and some earlier history could be traced to Jingshi Tongwen Guan in 1862 and Jingshi Daxue Tang in 1898. Cai Yuanpei would, as the General Director of Education in 1912, be the remembered pioneering intellectual person in Chinese public education. In early 1900s China had its system of colleges and universities quickly established, and as a complement some colleges, especially those of western medicine, were set up by European and North American missionaries. Namely, Sichuan University at present is actually coming from three different historical backgrounds, former Sichuan University (1896), Chengdu University of Science and Technology (1952) and West China University of Medical Science (1910 by missionaries). 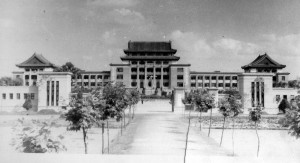 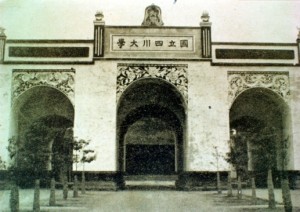 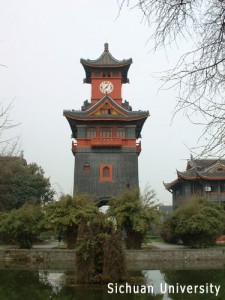 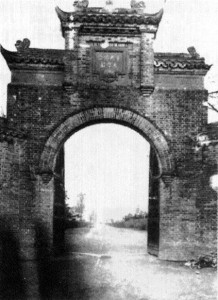 (Photos of the traditional gates and buildings of the three universities)

In the first half of the 20th century, both the public and private universities and colleges in China had been active frontier in the New Culture Movement in since 1910s, introducing and translating new and fresh ideas into China, and encouraging young students to be active in taking social responsibilities and later on in the War of Resistance against Japan. Then in 1949 when Chinese Communist Party took power and the People’s Republic of China was founded, all the universities and colleges were nationalized except a few private colleges such as Lingnan College left the Mainland for Hong Kong. In1952 a reorganization of higher education system in China was carried out along the European and then former Soviet Union lines with a focus on specialized training to meet the needs of the quick industrial and social development in the country. The specialized universities and colleges were run by different government ministries in addition to the Ministry of Education. West China University of Medical Science was an example.

At the early stage of New China, the government’s priority in education was the anti-illiteracy education. In early 1950s only less than 20% of the school age kids could go to school for education, and over 80% of the population were illiterate. If compared with the statistics in 2011, by the year of 2011 all the kinds in China have the 9-year compulsory education, and the illiterate population of the young and middle age were reduced to 1.08%. With this kind of changes, the demanding for higher education has been increasing quickly. But in the first three decades since the founding of P.R. China, the economic condition of the country largely decided the government investment, both from the central and local governments, in public schools and universities and colleges, which was very limited, if we consider the large population, high illiteracy rate and poverty in the 1950s, the natural and man-made disasters in 1960s and early 1970s, which held back the development of education in this country , even the universities and colleges were partly reopened with the students coming from workers, peasants and soldiers since 1972.

The restoring and normalization of higher education after the decade-long of Culture Revolution came in 1977 when the national college entrance examination system was reinstituted, and the Chinese higher education shifted from red (political criteria) to expert (academic achievement). Then we see a quick expanding of the university enrollment from 1978, when only 2.7% gross rate of the graduating high school students could get into universities, to 2013 when about 40% gross rate of the students could have their higher education. In some coastal areas and Beijing and Shanghai their figures are even higher. For the first time the Chinese higher education becomes a socially focused area, and the students and their families shift their attention from having opportunity to go to university to attending universities of good quality. Before the reform, the students were assigned to specific majors and institutions by the government and universities based on their examination scores, and the graduates were assigned to a life-long job position based on their academic performance in school.

Deng Xiaoping at the time acknowledged that China was behind the West by 100 years and the way to catch up was through education and open-door policies. For the first time, educators, professors and scientists were sent abroad by thousands to the developed countries in Europe, America, Canada, Australia and Japan. They had one to three years there for learning and training, and some of them had their master or doctoral degrees from the universities abroad. This bridged the gap in Chinese higher education, since its well-trained senior faculties were mainly coming back to China in early 1950s or former Soviet Union trained or self-trained as well. Since then government-supported visiting scholars and students’ studying abroad has been a national strategy to upgrade the higher education and science research and narrow down the gap between China and the developed countries. And in addition to that, the country in late 1990s opened up the self-financed students’ studying abroad, and since 2000 more and more families even send their talented kids abroad at high school or right after their high school. At a time the going-out and coming-back students and scholars were not even, but now the balance is almost achieved, seeing more students and scholars coming back home for better job opportunities or working environment. This open-door and studying abroad policy really gives Chinese higher education a great leap forward.

Another major reform in 1990s was tuition fee and job market. For decades the universities in China were tuition free, and the students were government supported, and they need not worry about their jobs. In 1990s with the reform, the students have to pay their tuition fee and accommodation annually, at a controlled rate that is not changed for decade, and the government support changes to scholarship to those who perform well in learning and to those who are in poverty. The jobs that were used to be assigned to the graduates now were competed for by the students with their talent and ability in the job market. And the college students’ unemployment upon their graduation becomes a social issue now that draws more and more attention from the governments both central and local. The universities also put their effort to help their graduates to have jobs and even to create opportunities for their students to create job opportunities by financing their practice with their initial innovative ideas.

With the increasing demanding for higher education from the society and the expanding of the enrollment in 8 years since 1994 there had been a reform and reshape of the universities and colleges, and at the same time the private or enterprise sectors started to step in for higher education. Some of the universities in various provincial capital cities and regions merged together into the comprehensive giant universities, and most of the universities had their campuses enlarged in double or even in triple sizes. Sichuan University was then the leading one in the merge, with the former Sichuan University of arts and science merged with Chengdu University of Science and Technology in engineering in 1994 and later further merged with West China University of Medical Science and its four affiliated hospitals in 2000. Then Sichuan University became one of the biggest universities with Jilin University, Shandong University and Zhejiang University in China. It has three major campuses with 30 schools in arts and science, engineering and medical science. Sichuan University now runs 133 undergraduate programs, 443 master programs and 349 doctoral programs with about 1370 professors among 4882 teachers, about 40,000 undergraduate students, over 20,000 graduate students and over 2000 international students. From this size one can imagine the quick increase of the higher education of China in its enrollment, and China has shifted in a short time from elite education to mass education. This explains well the quick increase of the gross enrollment from 7% of 1998 to 15% of 2002 and then to 26.9% of 2012, and now this figure is over 30%. The central government’s investment in education in China in this period has also highly increased from 2.7% of GDP in 2002 to 4% of GDP in 2010. By the year of 2012, the total number of universities, colleges and vocational colleges jumped up to over 2700, and among them 1024 were four-year undergraduate program universities, and this number is over 1200 by the end of 2014.

With the quick development and enlargement, China’s higher education is big or huge in scale but still weak in strength. To catch up with the international higher education level, Chinese government has also launched several specially financed projects, namely, “211” University Enhancing Project (100 universities in this project), “985” World-Level University Project (39 universities in this project) and “One-thousand Leading Scholar Project” (to attract Chinese oversea scholars to come back to the universities and research institutes), “One-thousand Young Scholar Project” (to attract the young Chinese oversea PH.Ds to come back to the universities and research institutes and enterprises), and “2011 Research Collaborating Project” (to encourage the universities and institutes to bring together the research resources in the major front academic research areas). On the one hand, Chinese central government and local government give their support to the speedy development of higher education, and on the other hand, more attention is given to the quality control, particularly for the undergraduate education. The teaching methodologies and teacher’s training are stressed. In 2005 there was a nationwide undergraduate program quality-control survey and on-campus inspection. The quality-control now at each school is the priority in teaching work in the undergraduate programs. The classroom teaching is shifting from teacher-centered to student-centered and then to learning centered, in which the students are not offered the “fish” but trained in skills about how “to fish”. Researches are carried out on the learning habits of post 1990s younger generation at the campus, the students are encouraged to have more hand-on practice in learning, and they are encouraged to have their creative and original abilities developed. More attention is given to the students’ ability to learn, ability to innovate and create, and the ability to articulate. In the classrooms less full-time lectures are conducted, and more chances to have the students’ voices and ideas heard. General cultivation in liberal arts, hand-on skill training in various academic majors and innovative and creative talent exploring in and out classroom are the new tendencies in undergraduate education at almost all the campuses of Chinese universities.

To match up with the speedy progress of its economy and the quick changes in social and cultural domains, China’s higher education is now moving on at a faster speed and is trying with the effort to meet the international higher education standards, there is still a long way to go. With the reform of the National College Entrance Examination and with the more independent administrative power for the universities and colleges, we could expect still deeper and quicker changes to come in next five years.

2 replies on “Higher Education in China: With Sichuan University as a Case”

This was an interesting story of the development of Chinese education. That there was
wide spread illiteracy throughout China in the first half of the 20th century was a surprise.
China has certainly come a long way. Thank you to Professor Shi Jian and his colleague for presenting such a clear picture of how China has progressed in the field of education.
Best wishes,
Jack

Thank you for sharing this. It is interesting to understand a little of the background to higher education. The rate of change is really going to impact the future developments.