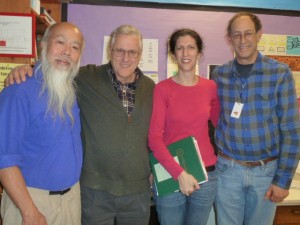 Stan Chu is on the far left

Lesson planning that involves everyone as learners using the immediate environment

Young children are curious about the natural world around them.  Teachers can facilitate their explorations of what is immediately available to them just footsteps away from their classrooms.

Here is a description of an exploration of animals found within the grounds of the Rato Bangala School (RBS) in Kathmandu, Nepal and done by 28 teachers of grades one through five as part of a two-week intensive in-service teacher training program I led August 6-15, 2012.  This was a continuation of a  20 year collaboration between the RBS and the Bank Street College of Education, New York City.

This work with classroom teachers having direct experiences with real materials is in keeping with the belief that teachers need to experience learning in the same ways children raise questions and gather evidence from first hand encounters with the physical world.  In addition, learners must create ways to represent their understandings in order to form mental models.

Using the immediate environment to explore and teach

For this session, I collaborated with Basante Yadav, an experienced Nepali science teacher at the RBS in facilitating an exploration of animals found along the edges of the school’s grassy football field.  Teachers were given small trays and hand tools to dig into the soil.  The goal was to find any animals, living or dead, that caught the interests of teachers, and that raised questions that could be answered in the context of available time, materials, and previous understandings.

Teachers formed themselves into groups of four, and walked to the school football field a few minutes away.  They spent about 15 minutes overturning fallen branches and rocks, and digging in the soil.  The teachers were helped to take particular notice of physical settings where they found their animals.  Was the soil moist or dry?  Was the area in the shade or direct sunlight?  Were the animals on leaves, soil, or underground?

The animals were taken back to the workshop classroom.  Each group had magnifying glasses to help them notice details of the body of their animal.  They then created an enlarged drawing on clear plastic with a fine tipped black marker.

Group then took turns projecting their drawings using an overhead projector.  Each group member said something about the animal or the conditions in which it was found.  This reporting-out included sharing questions group members had about their animal, and what they might do to try to answer these questions.

Small environments were then created similar to the physical conditions from which the live animals were found along the football field.  This close duplication of living conditions maximized chances for the animals to remain alive, and fostered the idea that living organisms need to be respected and cared for by learners.

During the following days, teachers devised ways to try to answer questions they had about the animals.  Could the animal see?  Could it hear?  What does it eat?  Should the soil be moist or dry?  Does it like shade or direct sun?

An aspect of student-centered learning involves questions learners themselves generate from direct experiences.  The teacher has a number of roles, including scaffolding questions of students when needed in order to make the initial questions more accessible to answering, and anticipating sufficient time and tools that help learners pursue their own questions.

Children are continually trying to make sense of the world around them.  They do this best by direct, active engagement with the physical world of people and places that have meaning to them.  At Bank Street College, we call this social studies.

Six year olds can investigate nearby eating places.  The focus on eating places is appropriate when there are a variety of businesses selling prepared food in the here-and-now lives of six year olds.  In some neighborhoods, there may be many different places to purchase food: fast food, sit down restaurants, and food carts.

Six year olds will come away with the understanding that eating places are organized, and in different ways.  Children find out what it means to be a customer when going into a fast food store, compared to being a customer in a sit-down restaurant.  In      addition, there are different jobs that people have who work in eating places.

Teachers arrange with a fast food business to bring a small group of six year olds to observe what it means to be a customer.  Children see that what is offered for sale is written on the wall of the store, along with some pictures of the food.  The customers line up, get to the worker who takes their order.  The customer pays, and then waits until the food is handed to them.  There may be tables and chairs to eat the food, or the food might have to be taken away. Children also notice the variety of jobs workers have in the fast food business: cashier, cook, cleaner, manager.

Children not only see the work that is being done, but also realize the skill and effort involved in doing these jobs.

Back in the classroom children discuss what they have seen.  There is a way to be a customer.  There are different jobs they have seen workers do.

Children then recreate their own versions of a fast food eating place.  Their recreations are based on what they have seen themselves in the real fast food setting.  “We need a sign so people know what foods they can buy.”  “How will we make a cashier register for the money?”  “Will we have chairs for them to eat their food?”  “What jobs do we need?”  “Who is going to do which jobs?”  This recreation by children of the outside world is at the core of making meaning from direct experiences.

At the Bank Street School for Children in New York City (www.bankstreet.edu), six year olds walk by outdoor food markets run by farmers who bring their produce into the city every day.

A greenmarket is organized in specific ways.  People make decisions of what to sell based on what grows at different times of the year and what they believe customers want to buy.  Farmers must decide how much to sell their produce for in order to make a profit.  There are specific jobs adults have that are connected to food at the greenmarket: farmers grow and harvest the food, people drive produce into the city each day, and workers sell the produce at the market.  Sometimes, a person does many different jobs.

Children visit greenmarkets, talk with farmers, and go to the wholesale produce area of the city.  They interview adults and other children within the school to find out what produce is the most popular in order to decide what to buy and sale.

Children use information they have gotten from interviewing in order to decide what to buy when they go in the early morning to the wholesale produce area of the city.  Along with their teachers, six year olds buy produce they think others will want to purchase.

Children then decide on how their own greenmarket will be organized in the lobby of the school.  “How much should we sale the bananas for?”  “We need a sign so customers will know how much each thing cost.”  “Who will collect the money?”  “What should we do with the money afterwards?”  “What do we do with the food that we don’t sell?”

“Too often we give children answers to remember rather than problems to solve.”  Roger LewinEllen Cornish and Don Jordon present extremely useful guidelines for creating student-centered lesson plans. We will present them as a series of articles that we encourage everyone to read and discuss:

PLANNING A UNIT OF WORK

Ellen Cornish has had 33 years’ experience teaching in Tasmanian schools. She has taught in both primary and district high schools during that time. She has spent time in senior management roles within the school setting. Ellen has also held the positions of treasurer and president of the Early Childhood Educators of Tasmania Association. She has led many professional learning sessions for her colleagues and is skilled in the mentoring and training of pre-qualification teacher trainees, newly qualified teachers and teachers who experience difficulties and those re-entering the profession. Teaching in Korea helped to enrich her experience as an educator. In March 2011the Mechai Viravaidya Foundation invited her to evaluate the leadership, curriculum, resources and teacher training and experience, at the Mechai Pattana Secondary School in north eastern Thailand. She was also asked to make recommendations for improvements to help bring the school up to the standard required to support the development of a teacher training institute. She has expertise in the education of children with disabilities as well as those with challenging behaviour and their ability to function within the mainstream school. One of her passions in education is to help students believe in themselves and their ability to achieve their dreams. Email: ellencornish1@bigpond.com

Dr Don Jordan, ScEdD, is an experienced educator, having taught in primary schools in Tasmania. His perspective has been enriched by his work with disaffected students in the United Kingdom and with Bachelor of Education students in the Gaza Strip and working with curriculum developers and teachers on behalf of UNICEF in the Maldives. In March 2011, Don was invited by the Mechai Viravaidya Foundation, to evaluate the leadership, curriculum, resources and teacher training and experience, at the Mechai Pattana Secondary School in north eastern Thailand, in preparation for it to become a demonstration school for the proposed Teacher Training Institute. Don has a particular interest in the philosophical and theoretical place of computers in primary classrooms in Tasmania, and their effect on students’ learning, behaviour and social development. Email: donjordan1@bigpond.com