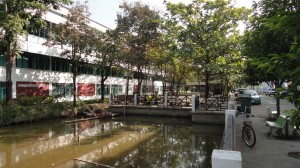 A Visit to the MaeChanWitayacom School: Inching Closer to 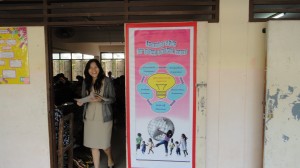 A visit to the MaeChan Witiacom School in Chiangrai at the end of November provided an opportunity to compare and contrast the visit I had made in early November to the Chiangmai Demonstration School.

The Chiangmai Demonstration school has 1, 356  students that include elementary and secondary schools , while the  Mae Chan School has 2,488 just in the high school.  Both schools have large numbers of students in classrooms.  An average classroom has between 40 and 45 students in a class.

Demonstration schools throughout Thailand, known as Sathit schools,  are  very selective, with only the highest scoring students admitted.  Demonstration Schools are expected to manifest excellent teaching models that the rest of Thailand’s teachers can learn from though  visits to the Demonstration Schools.  Amphur Schools are open to all  whose elementary grades are high enough . Amphur schools are located in city centers and are of a higher caliber generally than rural schools.  These smaller city schools attract higher performing  students and generally, higher performing  teachers.  About 60% of the Mae Chan students go on to major public universities where at Chiangmai Demonstration School 100% or almost 100% of its graduates go on to major universities.

It was surprising therefore, that I did not find a vast difference in the teaching styles  I observed this simply by  standing outside the classrooms of both schools and listening to the teacher conduct classes. There is still a preponderance of teaching that relies on the teacher giving information and the students  trying to soak up the information.

From the perspective of one who is an advocate  for student centered learning, student centered teaching and a student centered  classroom, I  found the MaeChanWitiacom School more interesting than the Chiangmai Demonstration School  on several counts.   To be fair, I was unable to sit through a whole class with a regular teacher at both schools, so my information is gathered as   the  observations of  as a casual observer.  There was abundant evidence at the Ampur government school that a real effort was being made to incorporate student centered teaching practices.  I observed some efforts in this direction at the Chiangmai Demonstration School but not on the scale of the MaeChan School

At Mae Chan School , I spent most of my time at the Mathematics building.  There is no doubt that the math teachers at Mae Chan are aware and trying to apply the inquiry method in their teaching.  There are math laboratories , for example, filled with “learning by doing” projects.  Every room I passed had a definite theme.  One room was for gifted math students, another was titled Pythagoras , another the Statistics Room. 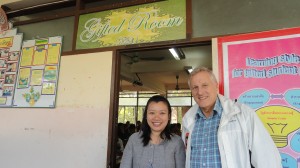 Nevertheless,  there was not enough evidence at either school that students are being made responsible for their own learning and that assessments of students are made on authentic performances as opposed to routine written exams that rarely test the true understanding of  learning.

In order to recommend a school as a  pathways school , that is , a school where other Thai teachers can learn student centered teaching methodologies, much more evidence of real student engagement in their own learning has to be in evidence.  Only three schools to date have shown that promise:  the Prasarnmit Demonstration School in Bangkok,  The School for Life in Chiangmai, and the Mechai Pattana School in Buriram . 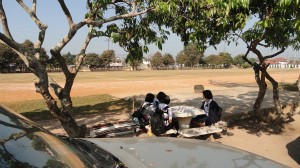 2 replies on “Inching Closer to Student Centered Learning: A Visit to MaeChan School”

am very happy in Thailand have such educational institutions, to help the healthy development of adolescents. Because, adolescents are human tomorrow, the future of the planet, pay close attention to them and improve their quality is very important.